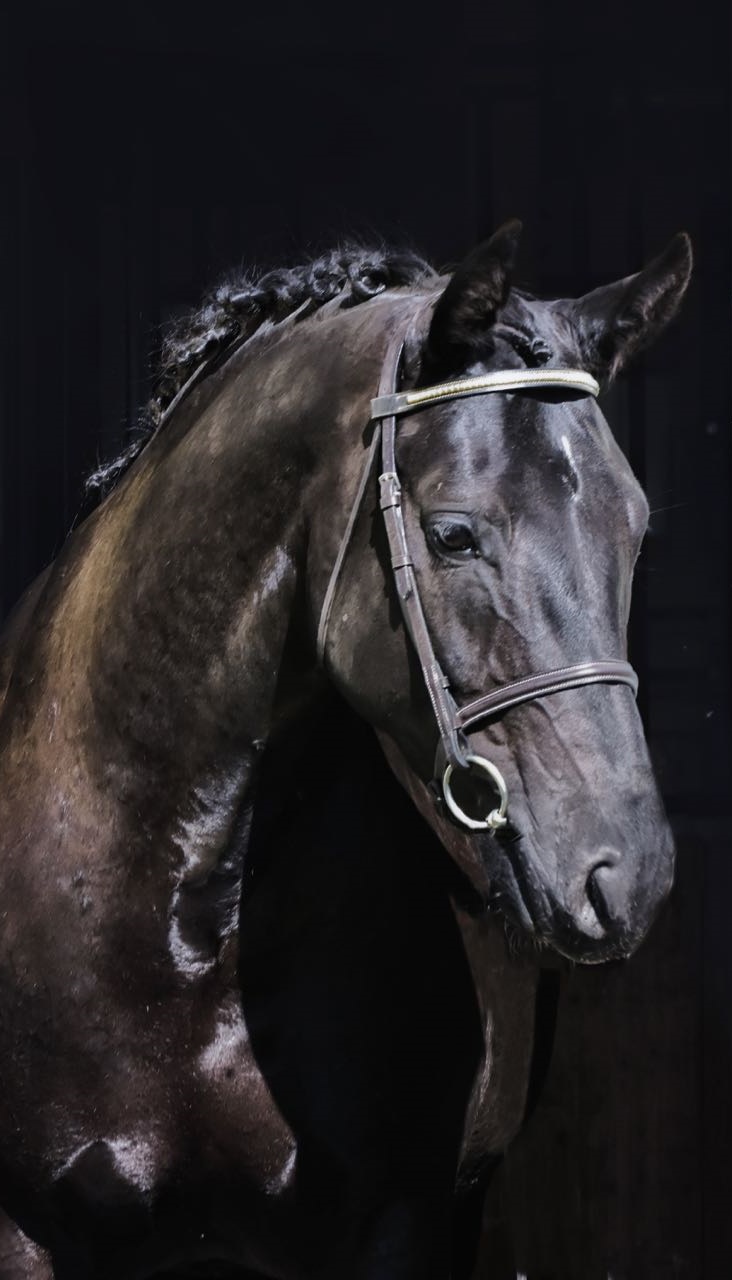 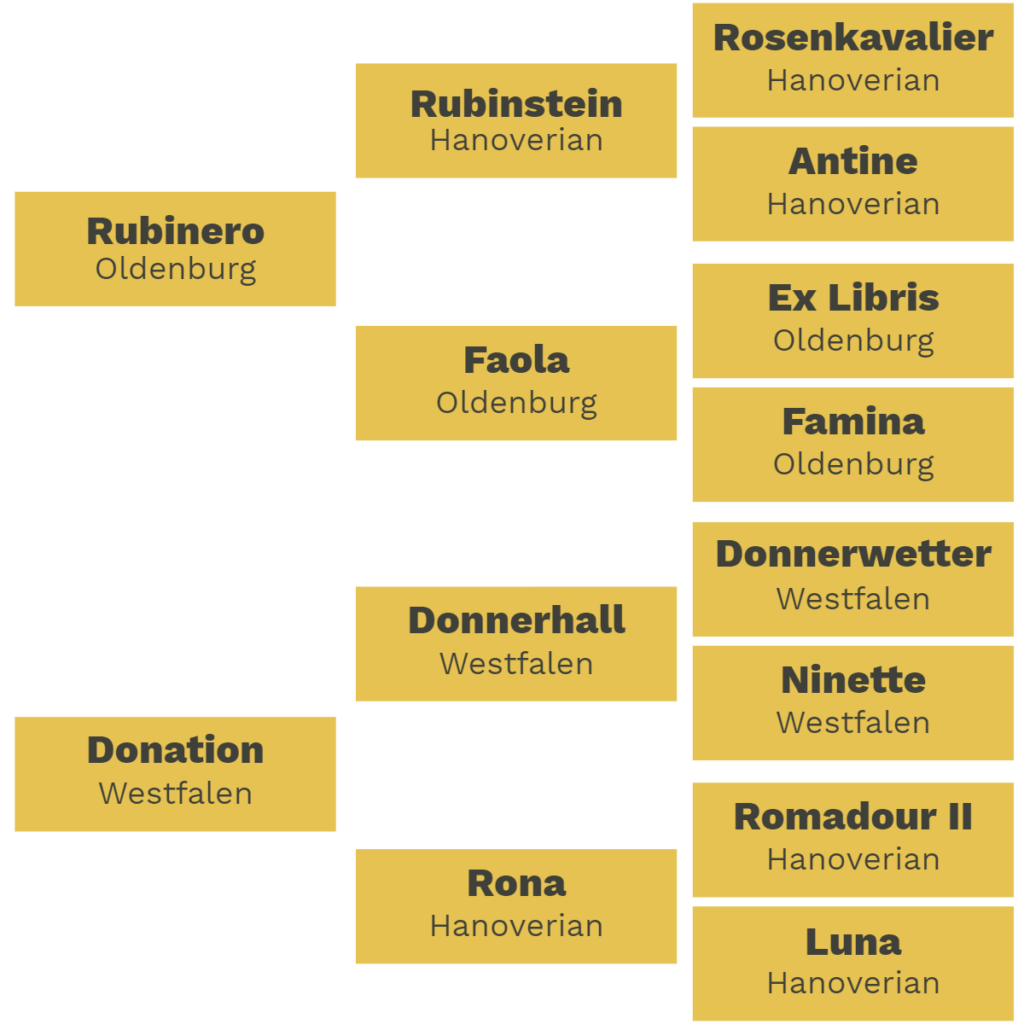 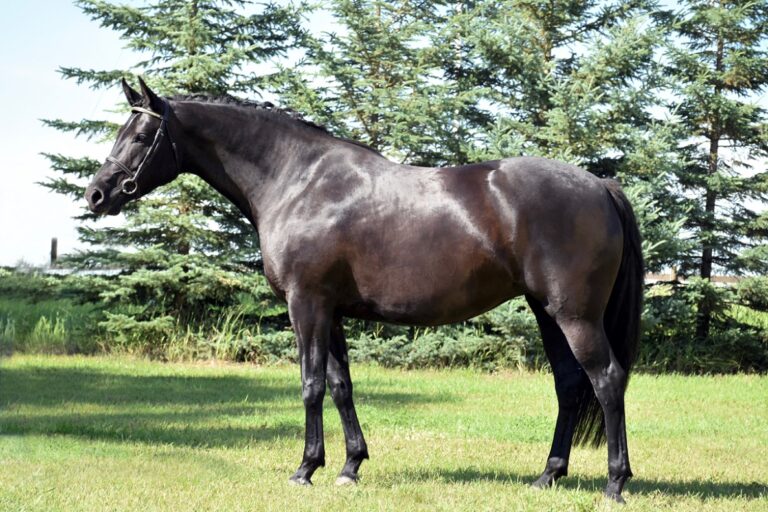 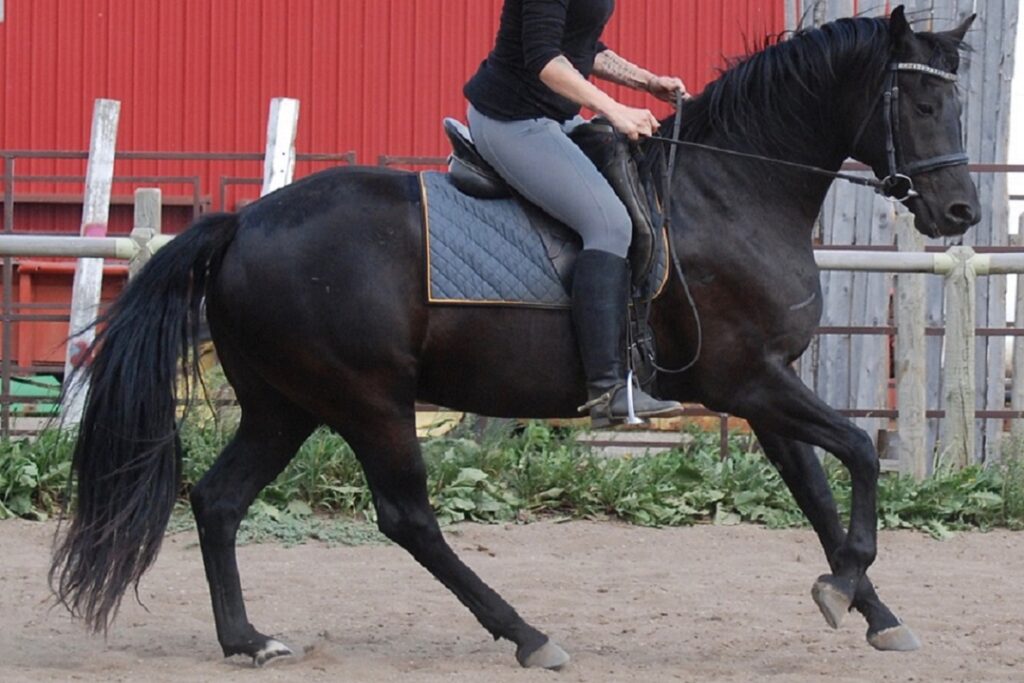 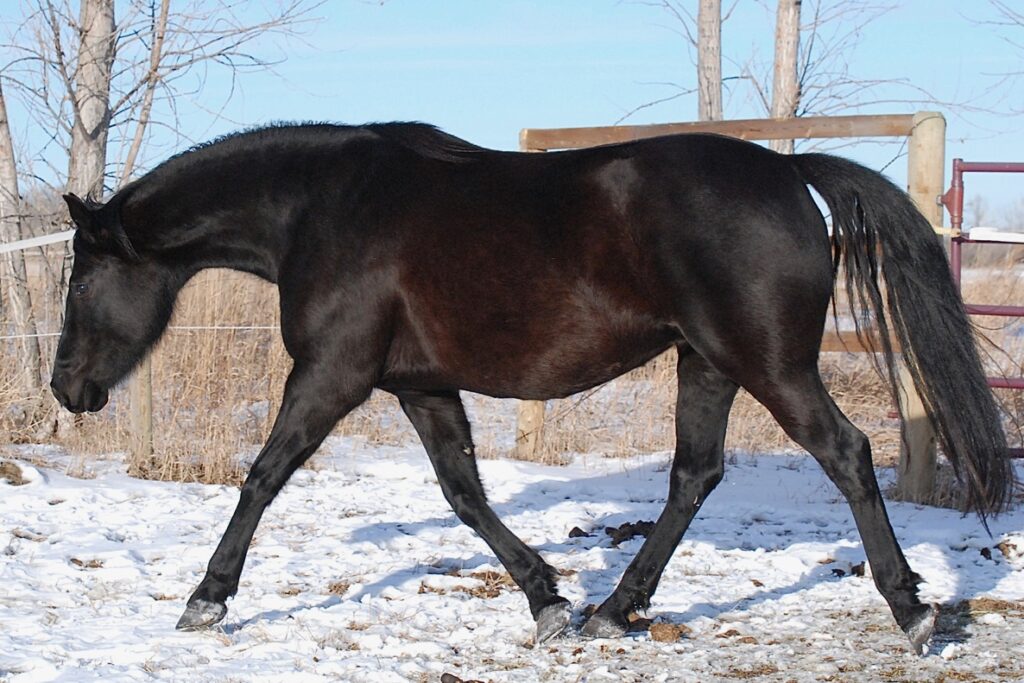 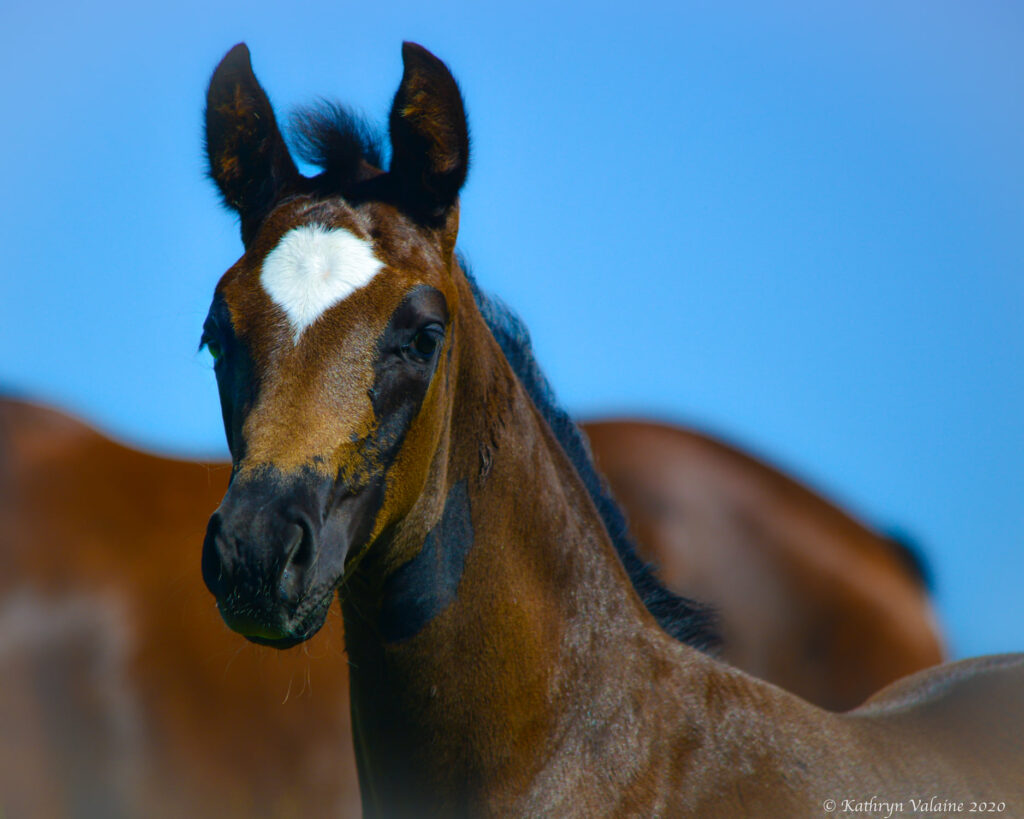 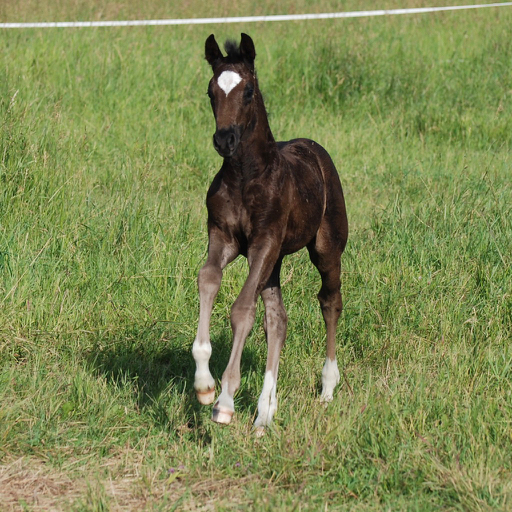 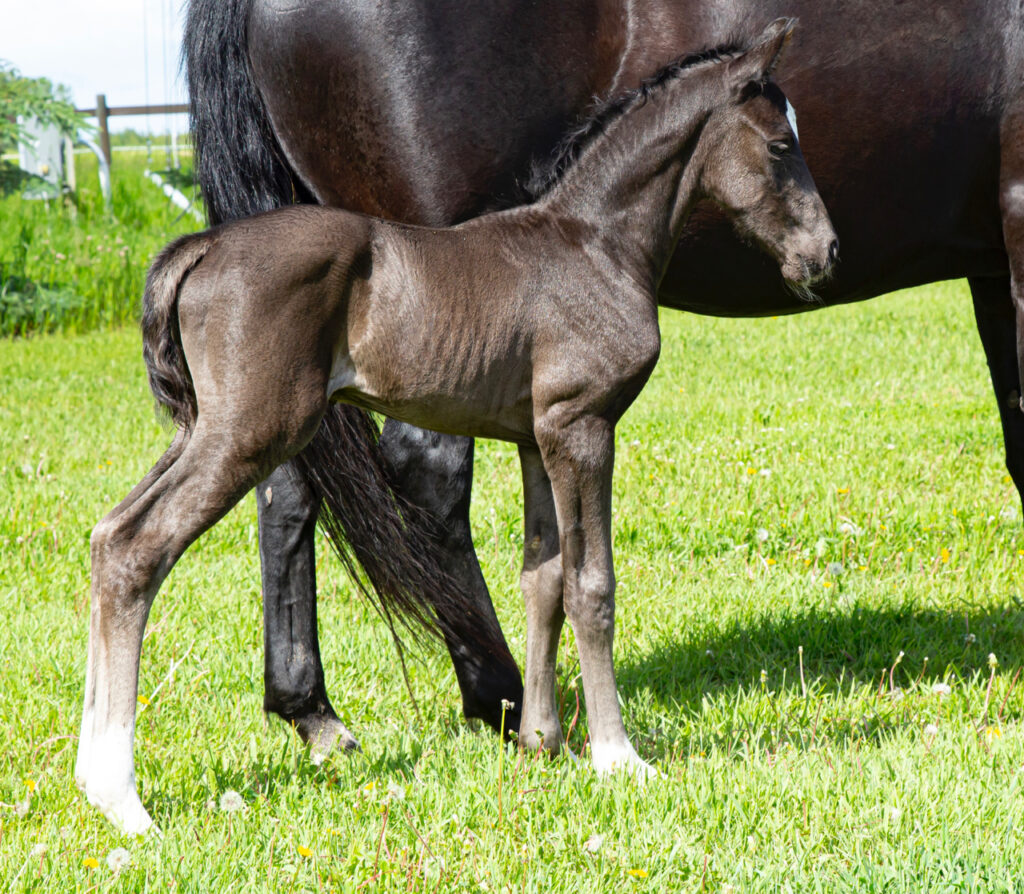 A second generation mare for us: a daughter of our prized mare Donation by Donnerhall.

Kreation was the first filly by Donation in a long time so we decided to hang on to her! She is a very good blend of her sire Rubinero (by Rubinstein) and her dam Donation (by Donnerhall) and created for us the basis of our ongoing breeding program; a mix of the R and D line in our broodmares.

She is fairly typical of that line: well built but a bit old fashion: not very leggy, compact with a strong back, loins, and hindquarters as well as a beautiful topline and a very pretty head. She has a willing, almost docile temperament and is not overly sensitive. She is not the type to jump out of her skin and is actually quite brave when faced with new things and quite tolerant of mistakes. She is incredibly social, currently the alpha mare, and always happy when given attention.

She was started under saddle with absolutely no mishaps. Krea genuinely enjoys attentions of any kind and tries so hard to please; it is hard to find a more willing partner! 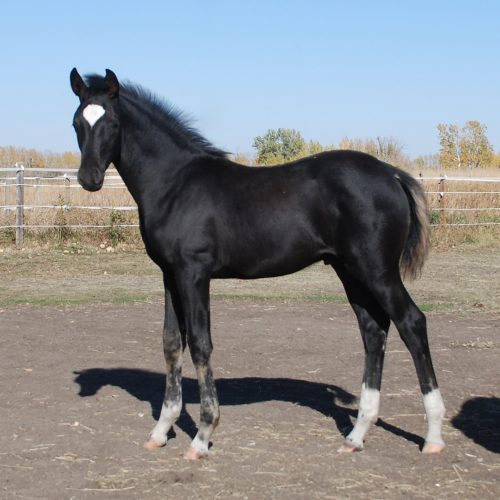 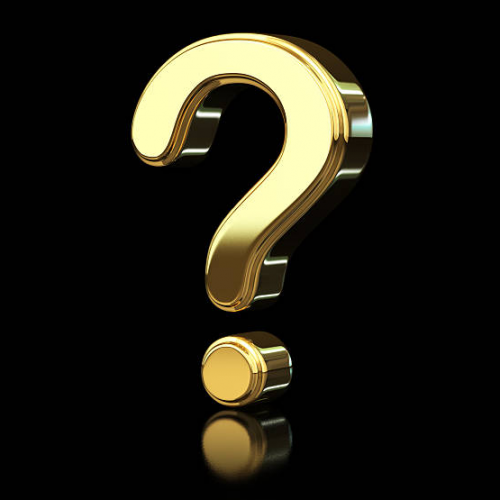 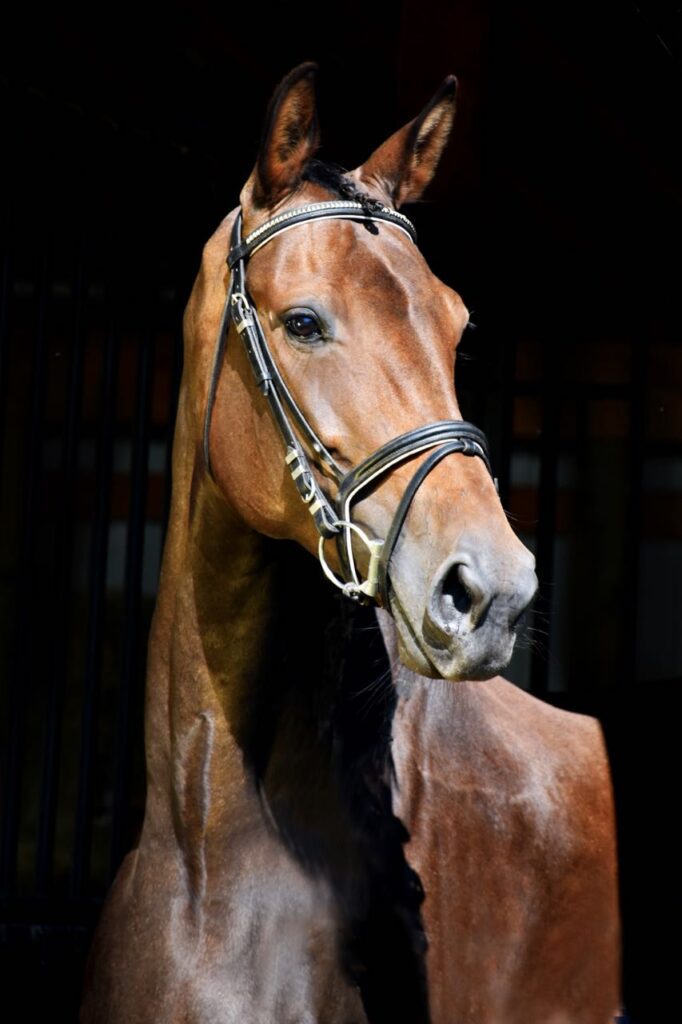 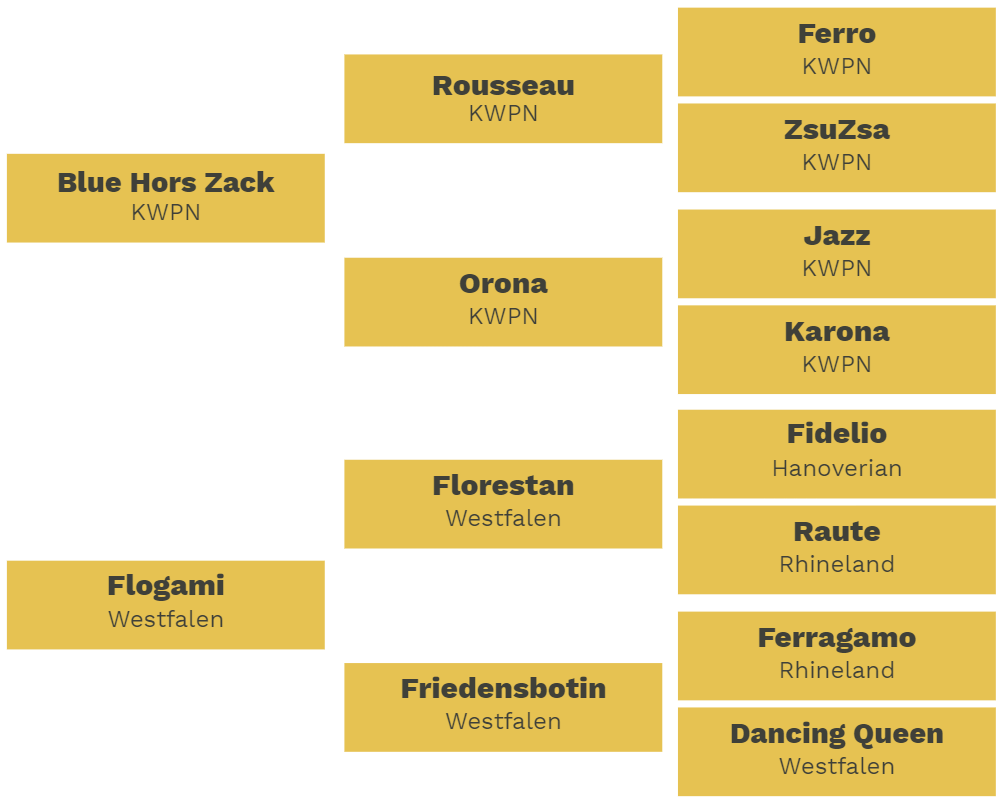 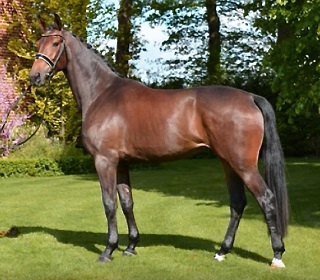 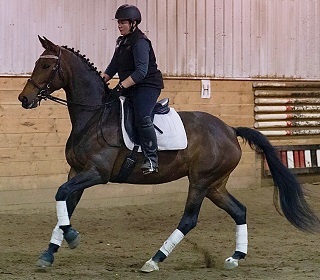 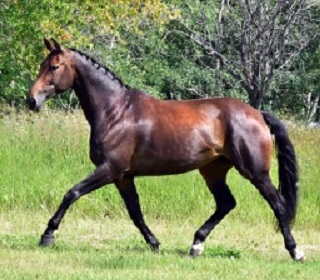 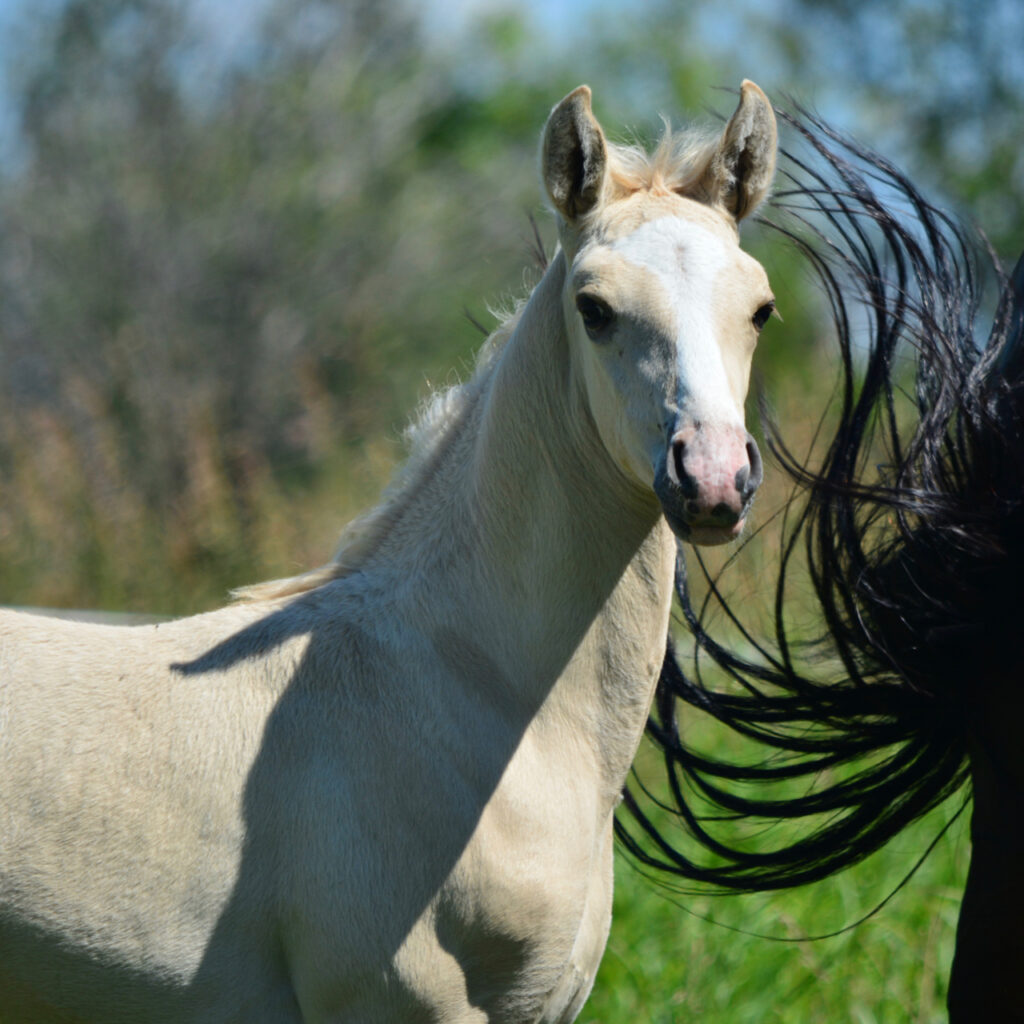 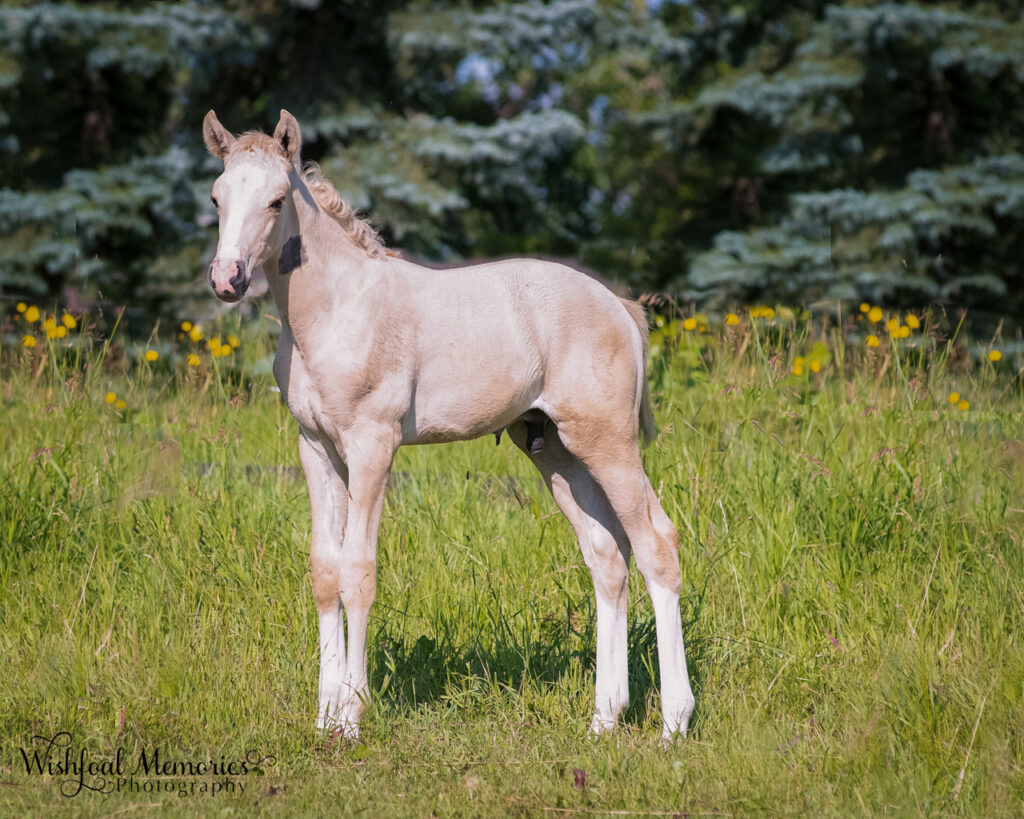 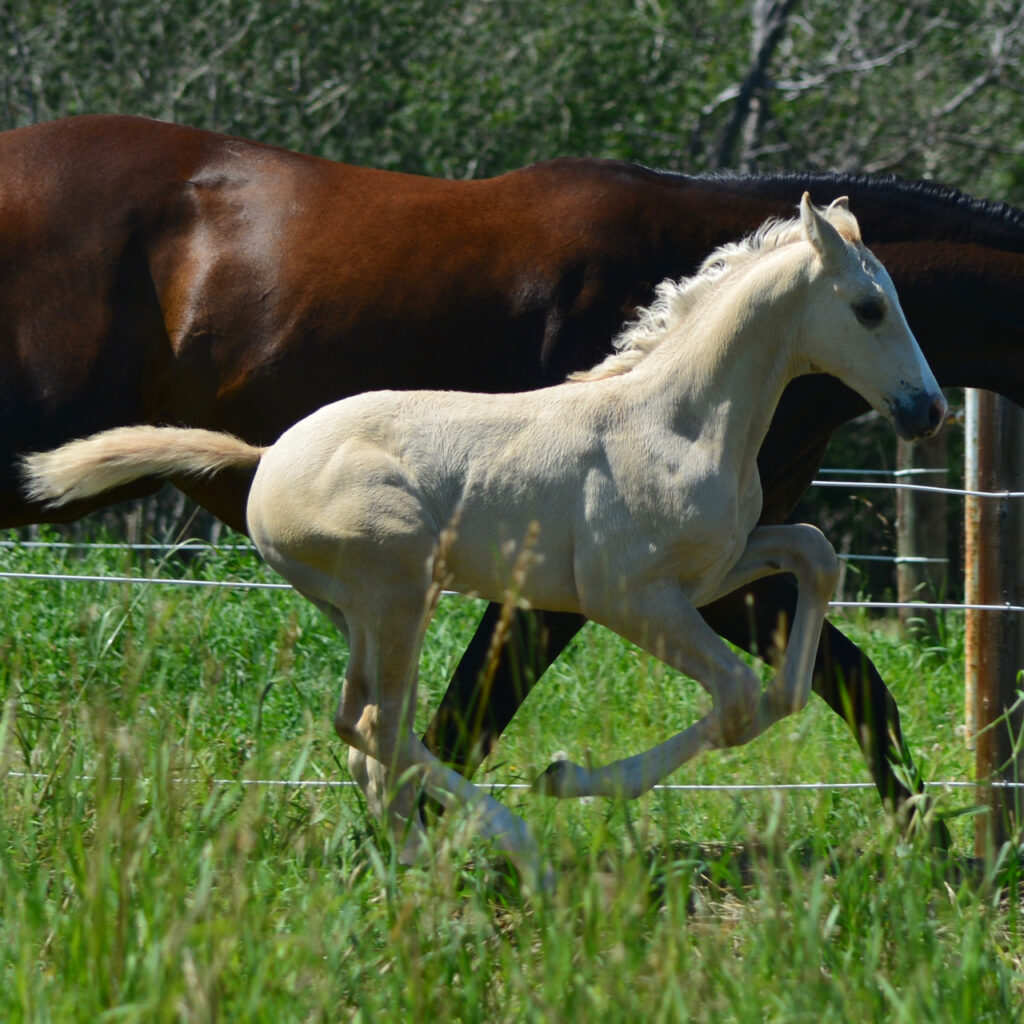 Introducing a daughter of the new breeding sensation and grand prix dressage stallion Blue Hors Zack. This stunning imported mare brings to us the proven modern dressage lines of Rousseau, Jazz, and Florestan.

Her sire, Blue Hors Zack, was champion of the 2007 KWPN stallion licensing and is now competing at the highest level of the sport against some of his most talented offspring that are now coming up the rank such as Zonik, Sezuan, Zoom, Zackarey, to name a few. He has 34 licensed sons so far.

Zagami’s dam Flogami also produced the immensely talented Zgander (also by Zack) currently coming up the ranks in Europe.  Two other brothers Dgander and Scalinger:  by Detroit (DiMaggio) and by Stedinger (Sandro Hit) respectively were sold to dressage homes in Europe.

She carries the proven blood of Florestan who’s impact on the dressage breeding world is only increasing lately through his sons: Fidermark and Florencio themselves top producers.

Zigami is a sharp, alert and sensitive mare. She is active and forward with a good rhythm in all gaits She is very modern in looks and movement, correct, balanced, uphill, and with long lines. When she was inspected she scored high and was deemed premium mare. She is lovely to handle, loves to work and while she never refuses attention she is also quite independent and not particularly interested in other horses but she is a very good mother to her foal. 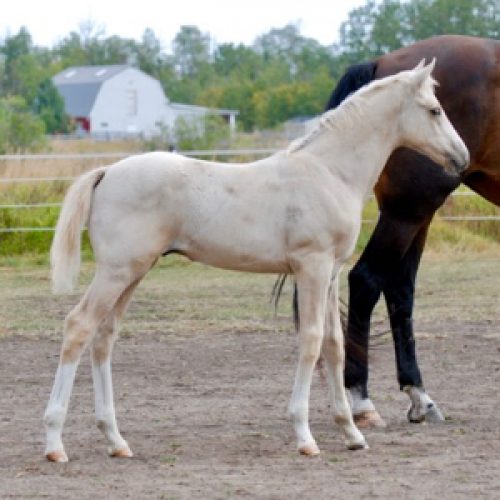 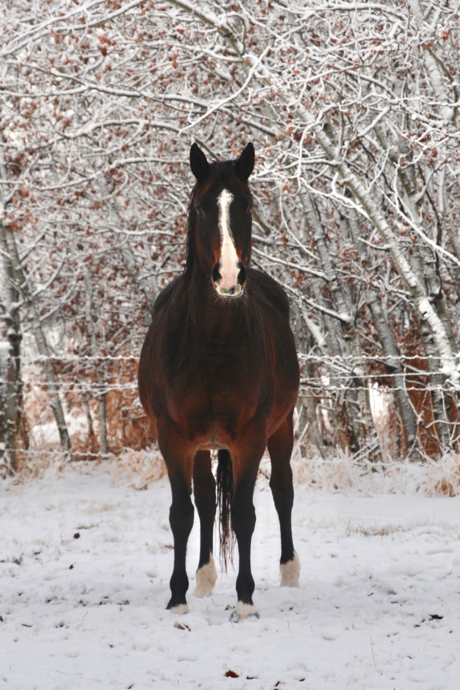 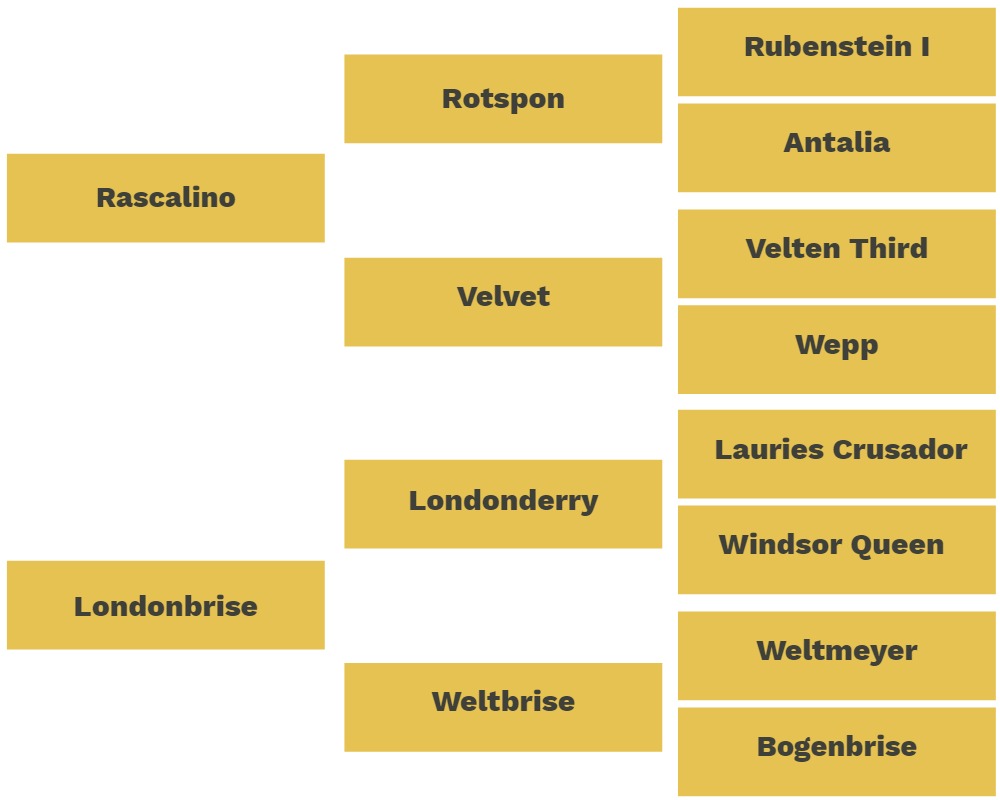 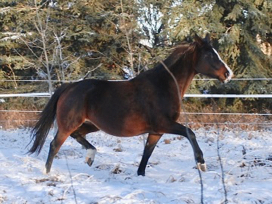 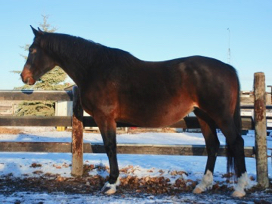 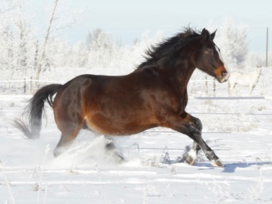 We are very pleased to have found Rascalina and to have brought her to Canada in late 2020 to join our little broodmare band.

She combines the very best traditional lines of the Hanoverian with her sire Rascalino standing at Celle for most of its life and her dam, bought at the famed Elite Hanoverian Auction, combining the blood of the great Weltmeyer and the proven refining blood of Londonderry.

She is of the older style: solid, strong with good bones, good feet, and a lovely calm nature.

She has already produced two nice colts for her previous owner and we look forward to her production here.