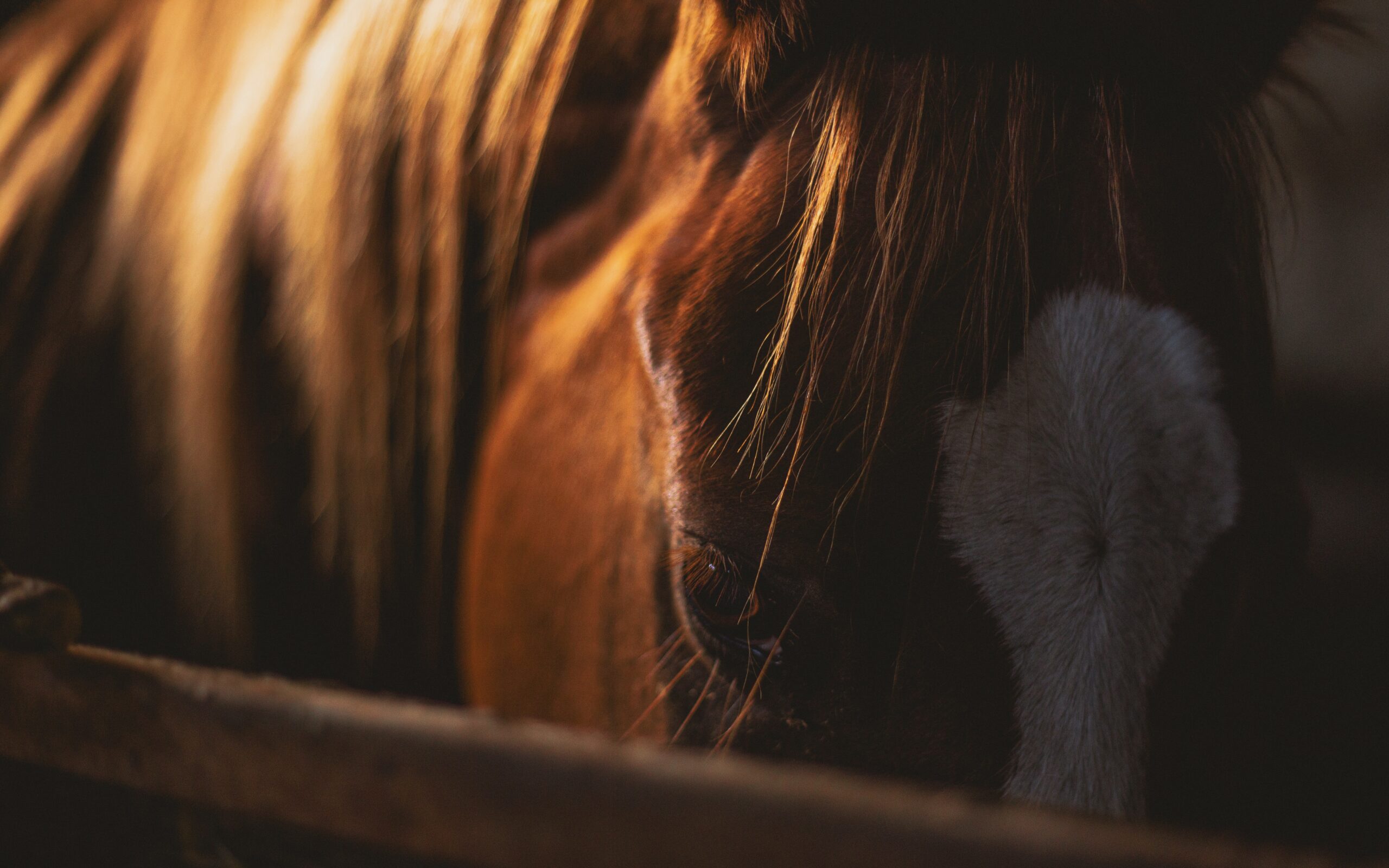 This winter, at almost exactly 8 months of gestation, Zigami aborted her Rotspon pregnancy without any warnings. It was understandably a gutting experience to lose a foal from any mare at any time but this was a cross I was really looking forward to. It was to be Zigami’s first full warmblood foal.

It raised many questions of course. Why? Why now? Was it infectious? Is my other pregnant mare at risk? Could have I done anything to prevent this?

What went through my mind?

Of all the causes for abortions in mares, the number one culprit is placentitis: it’s a very general term that means that the placenta becomes inflamed usually because of a bacterial invasion into its lining which can have many causes. Placentitis can be detected early and treated with some success but alas not always.

Had I missed some key signs?- I did not think so. I keep a pretty close eye on my girls.

The other main cause of abortion is exposure to the Rhinopneumonitis virus which causes colds and respiratory issues in its type 2 form but causes abortions and neurological issues in its type 1 form. For that reason, we vaccinate mares at regular intervals during their pregnancy to lower the chances of this happening. Zig had been vaccinated and was in fact due for her 8-month shot.

A loss of pregnancy at the 8 months mark can also be indicative of a uterus that is not able to sustain the demand of a growing fetus so in a young mare like Zigami it was particularly concerning. This had me a bit worried.

Alas, another common cause of abortion is infection with Neorickettsia risticii the gram-negative bacteria that causes Potomac Horse Fever. And Zigami had contracted this disease very early in her pregnancy way back at the end of August 2020 when she was about 30 days in foal.

We sent the aborted fetus and all the membranes to the pathology lab of the Veterinary School of medicine in Calgary for a necropsy.

The result came back confirming that the abortion had been caused by this gram-negative bacteria after it was isolated from the fetal tissue samples.

What is Potomac Horse Fever Exactly

Potomac Horse Fever was identified in the Potomac River valley of  Maryland and Virginia in the 1970s. It can cause severe colitis (inflammation of the mucosa of the lower digestive tract) and can ultimately lead to endotoxemia (general inflammation of major organ and circulatory systems).

It is caused by a gram-negative bacteria of the coccus group called, as mentioned above, Neorickettsia risticii but other bacterias have also been associated with the disease.

The bacteria are not found dispersed generally in the environment like Rhodococcus equi or Escherichia coli.  It lives in the digestive tract of certain types of parasitic worms. The horse is an accidental bystander.

The bacteria is really associated with an intestinal worm that lives in birds, bats, and rodents. To find out where the exposure can come from you have to follow the worm through its complex life cycle.

The worm is an adult in its target host (birds, bats, rodents), and it sheds its eggs in its digestive tract. Those then move through the environment first by being ingested by snails and then released by snails into the aquatic environment where they are picked up by larvae of aquatic insects that then mature and are ingested by their target host later on. The bacteria is just hitching a ride in the gut of that worm, but if a horse ingests either some snail droppings (unlikely, unless pastured in marshes) or some insect (more likely) the bacteria then enter the horse’s GI tract and wreaks havoc as it multiplies.

Because it is strictly contracted via ingestion, Potomac Horse Fever is not transmissible between horses.

What are the implications for breeders?

Potomac Horse Fever or PHF is a concern for any horse owner. If not detected very early it can be debilitating (leading to founder via endotoxemia) or deadly. It can also be very mild and barely noticeable.

When caught early it responds very well to a common antibiotic called Oxytetracycline and most horses are treated with a 3 to 5 days course of antibiotics while supported by fluid therapy since the bacteria can cause very severe diarrhea that in turn can then cause dehydration and all the associated impacts that can follow.

If the inflammation is kept to a minimum and antibiotic eliminates the bacterias the horse usually recovers nicely.

Unfortunately, the bacteria enter via the digestive tract but quickly is absorbed into the bloodstream through the intestinal lining, and in the case of pregnant mares, it then, most often than not, passes into the placenta. Once there is can reach the foal and start to multiply and cause the same issues it does in the adult horse: inflammation and toxicity.

Abortion can occur anywhere between 3 to 6 months later (in the case of Zigami it was 7 months- I really thought we were in the clear). If the infections occur later on in the pregnancy, the foal could be born alive but already compromised by the infections, and chances of survival without aggressive action are slim.

So any pregnant mares that are exposed to the bacteria are at risk to abort or delivering a severely compromised foal.

Any later-term abortion carries its own risks to the mare but it is worth mentioning that to add insult to injury, abortions due to Potomac also comes with the added problem of a retained placenta in a majority of cases.

However once cleared of the disease and freed of an infected fetus the mare is not more susceptible to this infection, in fact, the infection does confer a certain natural immunity to the disease for up to 20 months. Mares that have lost foals to the infections can go on to trouble-free pregnancies later.

Keeping in mind that the significant portions of cases are mild or even sub-clinical it is a tricky disease to deal with when it comes to breeding stock.

What can be done?

The PHF is not caused by a virus, it is caused by bacteria, and its effect is an infection in the digestive tract that then moves to the blood.

Its detection in horses showing symptoms can be tricky. There are a few kinds of tests: detecting the bacteria itself, detecting the antibodies the body builds in reaction to the infection via IFA (indirect fluorescent antibody test), and detecting the DNA of the bacteria in the blood via PCR (polymerase chain reaction).  Even so, confirmation can be tricky. In the case of Zigami, two tests done a few days apart came back negative although she was responding well to the Oxytetracycline treatment. It was only a very sensitive test done by the University of Guelf for a study on the disease that finally detected it in her blood and confirmed the diagnostic a few days after she came home from the clinic.

Since it is caused by a few species of bacteria and the fact that the main one ( Neorickettsia risticii ) has different strains, commercial vaccines are not very effective in preventing the disease. It appears to reduces the severity of the disease in some cases but the number I could find floating around was in the order of 70-78% effective.

Developing a vaccine for bacteria is tricky, it has to prime the body to make antibodies for bacterial infection. Vaccines are created by looking at antibody responses from previously infected horses-it gets complicated very quickly.

The safety of the vaccine has not been clinically tested specifically in pregnant mares and it does not prevent abortion. As a result, it is only recommended to use in endemic areas (areas where the disease is consistently prevalent) to reduce the severity of the disease. In those areas, the vaccine is recommended as part of the set of vaccination given to mares 4 weeks prior to delivery to ensure the antibodies are passed to the foal in the milk. Foals from vaccinated mothers show antibodies to the disease up to 3 to 5 months after which they can then be vaccinated.

Interestingly young horses seem generally less affected by the disease with animals younger than 2 yrs old rarely getting sick. We do not know yet why.

Limiting access to marshy land (I don’t have any in my pasture but I do live close to some) and insects (good luck with that!) very little can be done to prevent infection. The insects ingested can also have been present in cured hay, and it only takes a few to release enough bacteria in the horse’s digestive tract to cause a problem. Keeping a vigilant eye, optimizing the general health of the horse by good husbandry practice and nutrition is all one can really do in this case.

So in this case Zigami’s abortion was a very unfortunate but unpreventable event. I am thankful we saved her from not only the Potomac Infection in August by catching it early (when I say we, I mean a group of vets at Moore Equine in Balzac) but also that she aborted with limited complications. She did retain the placenta but because again we caught it early (thank you Dr. Wise for coming quickly) we were able to treat her right away and provide her body the support it needed to recover.