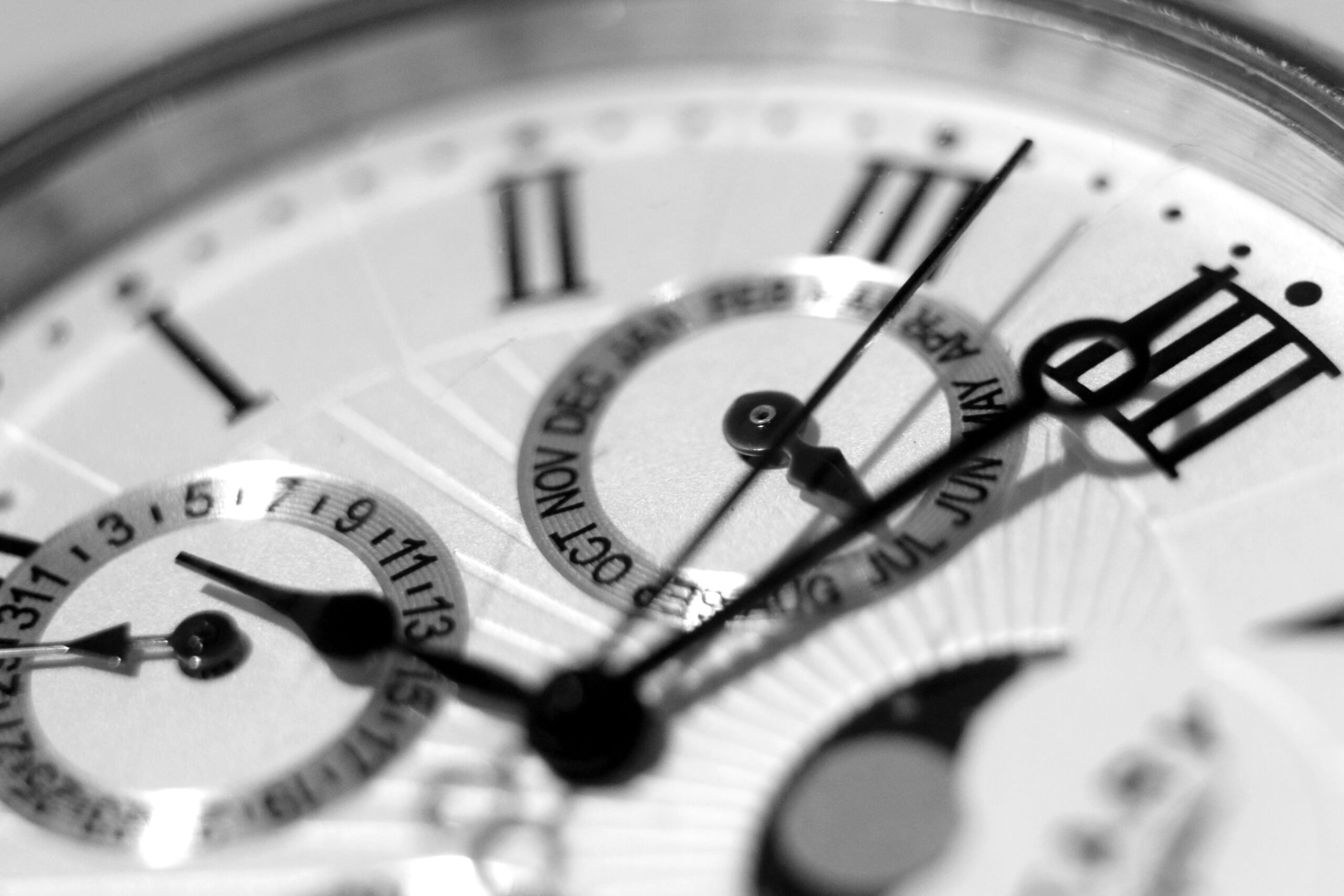 The popularity of frozen semen appears to be on the rise as technology becomes more commonplace and knowledge, and availability increase. Breeders are always on the lookout to have access to the best and most marketable sires available and a lot of them are only offered with frozen semen.

As we saw in our previous blog on frozen semen (The agony and ecstasy of frozen semen.) there are definite advantages and disadvantages to using frozen semen. One of the main challenges is this sensitivity to timing.

It always made me curious: Why is frozen semen was so sensitive to timing in regard to ovulation?

The most common (and valid reason) mentioned is that semen is most definitely negatively impacted by the freezing. It is almost inevitable that a significant portion of spermatozoa will be affected by the freezing process and this will affect everything from their movement, their longevity, and their fertility. How much of an impact will depend on the stallion but while we have good proof that fresh semen (straight from the stallion and to the mare) can live 4 to 5 days, and that well prepared cooled semen can live 48-72 hours, frozen semen generally only lives 24-48 hours sometime less with poorer semen. 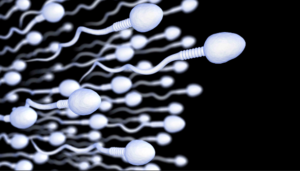 Between the spermatozoa and the ovum, the ovum has most definitely the shortest lifetime. An ovum will be fertile for up to 18 hours (Koskinen et all, 1990)  after which it shrivels and dies and remains in the oviduct (sometimes the mass of them will build up over time and even obstruct the tiny openings-but that is a topic for another day). To be on the safe side most practitioners assume the ovum can live 12-15 hours. 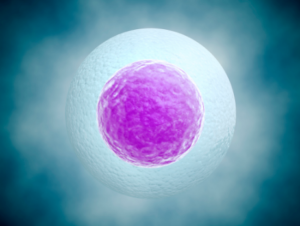 So it makes sense to have plenty of lively sperm waiting for the ovum.

With live cover, one can breed the mare 2 days ahead of ovulation and be confident that the ovum will be fertilized, for cooled semen the window is generally thought to be between 24 and 36 hours prior to ovulation, and for frozen 12 hours is seen as the maximum time ahead of ovulation. The idea is that the sperm will make its way to the oviduct (it has been demonstrated that sperm inseminated in the body of the uterus will have made its way to the oviducts within 4 hours, it is even less than that for sperm inseminated with the deep horn technique: about 1 hour) and wait for the ovum to be released by the follicle.

However, with poor, scant, or expensive frozen semen with an unknown, but limited, lifespan, it is probably wise to have it the other way around.

In other words to have the ovum wait for the sperm.

And this is why breeding with frozen semen requires more intensive monitoring as we wait for the follicle to ovulate. Once the ovum has been released: send in the cavalry!

When frozen semen is plentiful it makes sense to inseminate when we *think* ovulation is imminent and once again after ovulation has been confirmed. This method is the two-dose insemination method. Alas, most of the time the semen is so expensive we can only afford to breed with one dose, one insemination and we want to get it right.

And this is where things get wonky…

Common practice and preaching are that one must inseminate within 6 hours of ovulation. Why?

It makes little sense: if the ovum lives 12 hours (to use the conservative end of things) why this need to be within 6 hours?

Some say it is to allow the sperm to make its way to the oviduct ( 4 hours remember). Ok, so 6 + 4 gives us 10 hours. Still doing ok. If you are doing deep horn insemination: those swimmers are in the oviduct in about one hour. Still plenty of time.

Some argue it’s to give time for the sperm to capacitate. Sperm capacitation can only happen in the oviducts of the mare. This is a chemical change that needs to occur at a molecular level to allow the head of the sperm to be able to penetrate and push into the ovum. No capacitation= no fertilization.

Since we still don’t know how that works this is why in-vitro fertilization for horses is not a thing, one needs to *inject* the sperm into the ovum for it to work outside of the mare- fascinating but I digress.

How long does capacitation take? We have no ideas. Based on other species: “up to a few hours”.

That is why we are told the mares need to be scanned every 6 hours to determine when they ovulated. Thankfully with the use of synthetic ovulation inducers (Sucromate, Deslorelin, and the likes) the ovulation window has been narrowed down pretty precisely to between 36 and 40 hours post injections. That helps considerably but one still wants to monitor the mare because they sometimes go early. And so with ultrasound every 6 hours for 24 hours, it becomes pretty demanding on the veterinarian or technician’s times and on the owner’s wallet.

It would appear IN THEORY to give a good margin of error for allowing both ovum and sperm to meet optimally. 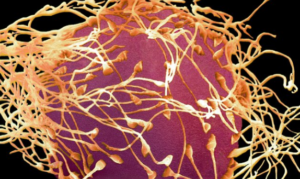 What does the data say?

A team decided to find out.

A team of very respected specialists (Newcombe, Paccamonti and Cuervo-Arango, 2010) reviewed the insemination records for mares bred with European warmblood frozen semen of all quality (there was no control on the quality- the mare owners picked the semen and in that sense, it was completely random). All mares were bred post insemination with one single dose. All the mares were followed post insemination and all were infused with a small volume of broad-spectrum antibiotics and given oxytocin. Those that required flushing because of fluid accumulation were flushed. Mares were of all ages ranging from 2-23 yrs old. So in other words a really nice representative sample.

867 cycles were documented. The standard approach was to check mares every 8 hours as they near ovulation. For various reasons (staffing, emergencies, etc..) the time between ultrasound examinations varied, however. The pregnancy rate and the occurrence of early embryonic death  (EED)(that is when a mare conceives but lose the pregnancy in the first two months) were recorded.  And below are the results: 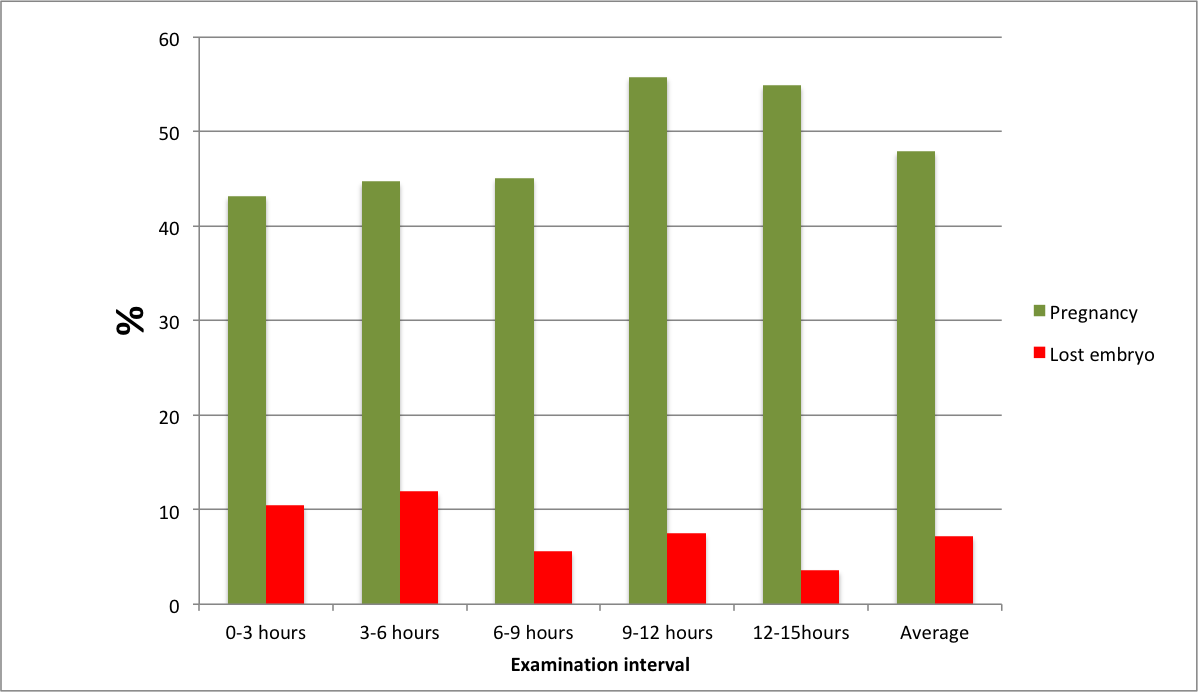 What the graph shows are that there is no clear benefit in monitoring mares at intervals shorter than 10 to 12 hours. In fact, the 9-15 hours window is actually statistically better. EED also drops for that period. (That seems to contradict in part some other findings by Vanderwalls and Newcombe in 2007 on a smaller cohort- again the post-breeding protocol might have an impact). You can think of all kinds of explanations for this but the data stands. The reference to the article is at the bottom of the page.

This data was published in 2010 so why is the “within 6 hours of ovulation” holy grail persisting?

I can think of a couple of reasons. Some are facts base others are more psychological I think.

We know two things for sure.

One: frozen semen can be more irritating to the mare’s uterus  (for various reasons I won’t get into here) and they are more likely to develop some post-breeding inflation that needs to be cleared up.

Two: once ovulation has occurred the progesterone levels in the mare start to rise and that lowers the defense mechanism of the uterus so that it is less able to deal with this inflammation. Also, the cervix starts to close limiting the mare and our ability to clear the results of the inflammation with flushes and ecbolic drugs such as oxytocin. Inseminating closer to ovulation buys you a few hours to treat a mare with clearance or inflammation issues.

The 6 hours fixation did however come from somewhere. A study done in 1990 by Wood et al. involving mares bred with fresh semen before the importance of post-breeding inflammation mitigation was well understood did show that breeding 6 hours post-ovulation did have a negative impact on pregnancy rate.

However, with current knowledge and practice (with deep horn insemination the treatment for inflammation can start as early as one hour later) it is should no longer be held as a goal to achieve.

Other reasons that this 6 hours is persisting and touted as best practice is also a bit of;  tradition, repetition bias ( the more often you hear a piece of information the more likely you are to believe it is true), and the need to feel pro-active and in control.

So to those doing frozen insemination, the fanatical scanning of the mares in the middle of the night to be within 6 hours of ovulation might be reserved to those that require aggressive post-breeding treatment and in that case, deep horn insemination and uterine lavage might be more beneficial than trying to inseminate within a few hours of the ovulation.