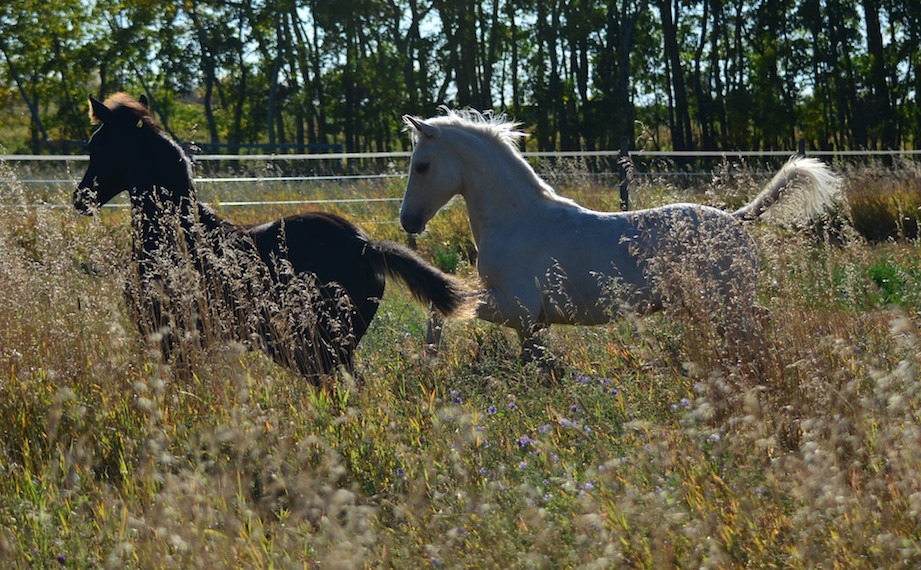 The 2020 foals have reached their 6 months birthdays.

Every year, every foal comes into the world with its own characteristics and they slowly evolve into the horse that they will be as adults. Watching the beginning of this journey is always fascinating.

In almost all aspects this year’s foals couldn’t be more different from each other. One is small, refined, sensitive, insecure, and black. The other is big-boned, self-confident, quiet, and pale palomino. 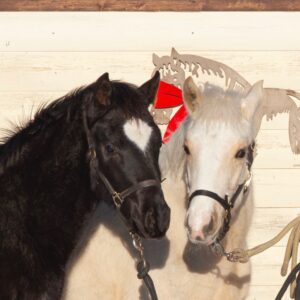 This little guy is like a little butterfly coming out of his chrysalis. He was vulnerable and soft and sensitive but he is learning to cope with the world and he is gaining confidence -at his own pace.

He was born active,  sensitive, and very alert. It gave him a certain presence for sure but when you are this sensitive it’s like the entire world is screaming at you. It can take a bit of time to start picking apart what is scary and what is not. Thankfully he is very smart and curious therefore he investigates and learns if given a chance to do so at his pace and in a safe setting. He is not nearly as spooky as his dam was at his age so considering how brave she is now I have very little doubt that this colt will mature into a trustworthy partner.

It is important with these sensitive foals not to overstimulate them but on the other hand not to shy away from exposing them to what they need to know.  He learned very quickly the basics of haltering and leading in hand. Since he feels everything, there is really no need to put a lot of pressure on him to get a response. He is very respectful of the halter and gives beautifully to pressure. But on the other hand only the softest of brushes for him. He doesn’t particularly like to be cuddled or touched and fussed over. I often simply walk up to him and stand by him. He will sniff me, accept a quiet hand on his neck or his croup and he is content. If I insist on touching him and scratching him he will simply leave, he is telling me in his own way that it’s not entirely comfortable and that is ok. I can certainly brush him and touch him all over, pick up his feet, fold his ears if I need to-that is not the issue. It’s a matter of preference.

The silver lining of dealing with an insecure foal is that he quickly relies on us for confidence. When he is worried, slipping on the halter has a calming effect. Being told where to go, when to walk and when to stand seems to give him the confidence he naturally lacks for now. He seems to say “oh thank god someone that knows what is going on!”

Since he likes to move, walking in hand is a real pleasure with him, he walks forward with good energy and purpose. He remained glued to his mother for the first four months, never venturing very far and very hesitant to engage with the other colt if it took him too far away from the protective flank of his dam. It was frustrating when taking a video of him to have him prance away from his dam and just when you would get some good footage he would stop and return to mom.

I think that weaning him too early would have been a mistake in his case. He needed to build this internal confidence that comes with some maturity and removing him from his dam would have taken away that solid base. He is starting just now to eat comfortably away from her and to stay with the other colt if his mother goes off to pasture. He will be weaned in about a month, gradually and I think once on his own he will become even easier to work with.

We expect him to be about 16hh at maturity, and I think he will be a nice combination of forward, sensitive, and sensible. He certainly has the making of a fun riding partner.

The palomino is pretty much the complete opposite.

He gained confidence and assurance earlier than the other colt.  He walked away from his mom, drank water at the through, grazed on his own, ate his ration, and hung out with the other horses rather than his mother weeks before the other. Since the age of about  4 months, he had no separation anxiety if his dam disappeared from sight for a time. He takes rebukes and correction and learns quickly from them but doesn’t overact or carry stress from it. I think weaning will be very easy at this point.

Being very self-assured, he doesn’t always understand why he should do the things we ask and he occasionally pulls a donkey (plants his feet and mulls over if he really wants to move or not). He also doesn’t necessarily rely on us for reassurance. It means that he doesn’t spook easily but it also means that when he is worried or concerned our presence doesn’t bring him as much comfort as it does for the other colt. It is the downside of the confident horses, they gain confidence on their own terms and at their pace, and while we can assist it really is up to them.

Learning to accept the halter and picking up his feet were not a big deal for this boy. He saw no threat in it and when he tested the limits he took discipline for what it was and quickly learned from it. Learning to lead was and still is a bit of a challenge. He moves slowly, never completely convinced that all this effort is required to end up right where he started. Leaving his food is never a popular option and getting up when napping in the sun is positively rude in his opinion. But he has a good nature and always gives in and does what he is told. If he could sigh, I think he would.

He will cover quite a bit of ground to spend time with people and get attention. He is gentle and patient and he loves physical contact. He doesn’t mind a good vigorous brushing, which is a good thing as he loves to takes his naps in rather dirty spots, and being so pale he looks like a disaster most of the time.

While he is by a pony sire he will likely mature in the 16.1 to 16.2 range-closer to his dam in height than his sire. He has good bone for his size too. I think he will be the tall, quiet, and handsome one for whom everything seems to come easily.

If you enjoyed this analysis of our 2020 foals, consider purchasing your next partner with us.

Next year we are expecting foals by Secret and Rotspon.