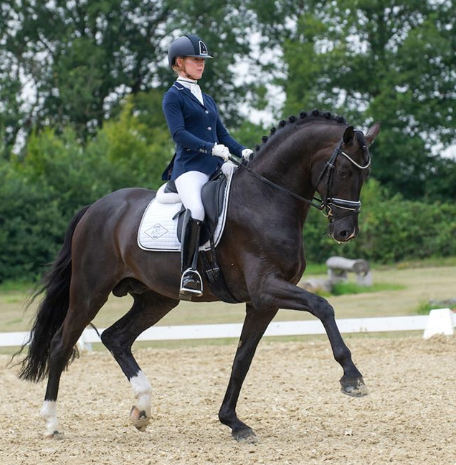 The breeding season for 2020 is now over.

Some years, all goes well. This year was one of them: the timing was perfect and both mares caught on their first cycle. Somehow, just like last year, they ended up being bred just 3 days apart. This year they foaled about 2 weeks apart, we shall see what happens next summer!

We have some interesting foals coming up next year if all goes well. It’s a long 11 months between now and then but it won’t change what we have coming up so we might as well let you know!

Kreation had a very nice foal by the stallion Fabregas and so we strongly considered using his leggier more modern ¾ brother (Furst Nymphemburg) but we will save that for another year and see how Pavarotti matures.

The young stallion Secret (pictured below) is the darling of the breeders’ world these days. It’s not often that a stallion comes along that has the pedigree, the movement and athletic ability for the top, the temperament and rideability for anyone to love AND has absolute rocket fuel for semen.

Now, we don’t usually breed to young stallions, but he already has 3 foal crops on the ground the largest one will be starting under saddle next spring. He produces well, his foals generally seem to have excellent temperament on the ground and show improvement in the movement department. He also comes from lines we are starting to really like: his sire is Sezuan who is by Zack (Zack is the sire of Zigami) and, on the mother side we have the solid bloodlines of Rotspon and Sandro Hit. So overall we have combined in him a lot of the bloodlines that we quite like and that are extremely proven. Combining this long-lined, expressive mover with Kreation’s more compact form, reasonable movement, and with the Donnerhall temperament coming trough I think this will be a very nice cross for anyone looking for a nice dressage prospect for themselves. It will be a black foal because of Kreation’s genetics.

For Zigami we picked our all-time favorite: Rotspon (see the photo below). This stallion’s reputation is well-made and rock solid. He makes lovely dressage and hunters because of their harmonious built, good but not extravagant movement and stellar temperament.

Looking at her colt this year Zigami needs no help contributing to the movement department. She has a wonderfully active and willing personality that could be toned down a smidge for the weekend warrior. She could have a better neck (better muscling, the position, length, and arc are all lovely) and be a bit more compact overall if one was to look at her very critically. So I think this will be a nice blend of the new modern line of Zack and Florestan with the older bloodlines of Rubinstein. Neither Rotspon nor Zigami are homozygous for anything so the foal could be bay, chestnut, or black.