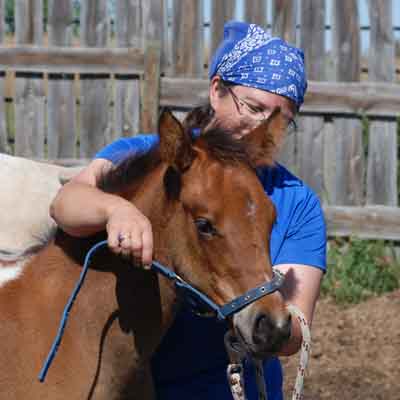 Part 3-Introduction to the halter

You might have noticed that until now no halter has been involved.

The main reason is you are only human: the moment you have a handle on something you will want to use it.

Why is that a bad thing?

Our tendency when handling any horses is to grab the halter and tell the horse where to go. It might sound redundant or pedantic but babies are not born halter broke. They are not even born with an understanding of giving to pressure.

Fun fact: it’s actually the opposite: you cannot push (or pull) a foal’s first reaction,  because its instincts, is to LEAN into pressure.

That’s what makes it so hard to move a foal toward mom for example when helping it figure out where the milk bar is right at birth. If you put pressure on their butt they will lean into you and literally sit in your lap!

So back to us: if the baby has a halter you will want to use it as a handle and will hold that halter as the baby fights back and pull. Babie’s necks are delicate and can be damaged by too much force. There is no point in using a halter on a baby that doesn’t understand the concept of giving to pressure. That will be our next lesson.

The second reason we have not put the halter on yet is therefore that the halter is of very little use at this point. All we were doing in Step 2 was making the foal comfortable with being around us, being touched and hugged and facing his fear of being “caught”. 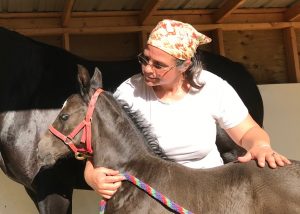 So now we introduce the halter, we make it part of our routine: we catch the foal,  reach around its neck and then we gently slip the halter on its nose. Again here: any movements the foal make we will follow it and quickly secure the halter-no fuss, no fight. Since it generally takes two to fight we will defer the fight for another time: we just want the halter on. Once it is on and secured we then finish our handling. We return to just petting and being quiet. We then take it off and then on and then off…. You get the picture.

The first reaction of the foal to this new “face-hugger” will generally be one of annoyance. They will shake their head and try to get rid of it: be careful not to get head-butted. Some will rear in protest. The reaction is generally short-lived however and they learn to accept it.

We don’t like to leave the halters on for very long, but while we clean the stall, or feed the mare we will leave it on and let the foal get used to it. We don’t leave them on without supervision however in case they get caught in something. Again: the foal’s neck is fragile and it is just not worth the risk of injury.

Once we have the halter we use it to clip a lead shank that will do a figure eight around the foal’s butt. (I like to put the tail end of the lead shank back into the snap ring). We then encourage the foal the move and we walk with it wherever it goes. If he tries to get away: confused by the rope or by us following it everywhere we have the rope to hold on to him –NOT the halter.

We will pull on the rope to keep control of the foal and yes there will be some scrambling and some pulling but it will not be on the foal’s head or very little of it and if fact we try as much as possible to go with the foal whatever it chooses to do. The point is for it to understand that we walk “together” and it’s ok and nothing bad or painful happens because of it.

A word about the inevitable resistance (I prefer to fight a horse when it is 200lbs baby): we will HOLD-we will keep the same amount of pressure, following the foal if need be. When the foal yields to pressure or just stops fighting for whatever reason we will right away release the pressure and be quiet and let them calm down.

We always end during a quiet moment, a gentle unclipping of the lead shank and we walk away. The foal continues to learn that fighting leads nowhere, that nothing bad happens, and that things are rather pleasant and calm once everyone stops scrambling.